Recently, I posted a basic introduction to CUDA C for programming GPUs, which showed how to do a vector addition. This illustrated some of the CUDA basic syntax, but it wasn't a complex- enough example to bring to light some of the trickier issues to do with designing algorithms carefully to minimise data movement. Here we move on to the more complicated algorithm for matrix multiplication, C = AB, where we'll see that elements of the matrices get used multiple times, so we'll want to put them in the shared memory to minimise the number of times they get retrieved from the much slower global (or device) memory. We'll also see that, because data that a thread puts into shared memory is only accessible by the other threads in the same thread block, we need to be careful how we do this.

First, let's ignore those concerns and put together the simplest implementation of matrix multiplication; then we'll analyse the memory access, and see how we can improve on it.

Before we begin, however, some-error checking. Below is a function-like C macro that will be used to surround each CUDA statement we execute with a check of the return code. The return code is set to the pre-defined variable cudaSuccess if the statement executed successfully, or an error value otherwise. (Hence, we declare the variable that will contain the CUDA statement return to be type cudaError_t.) Where an error value is returned, we pass this to the CUDA function cudaGetErrorString, which returns an error message that we can print. 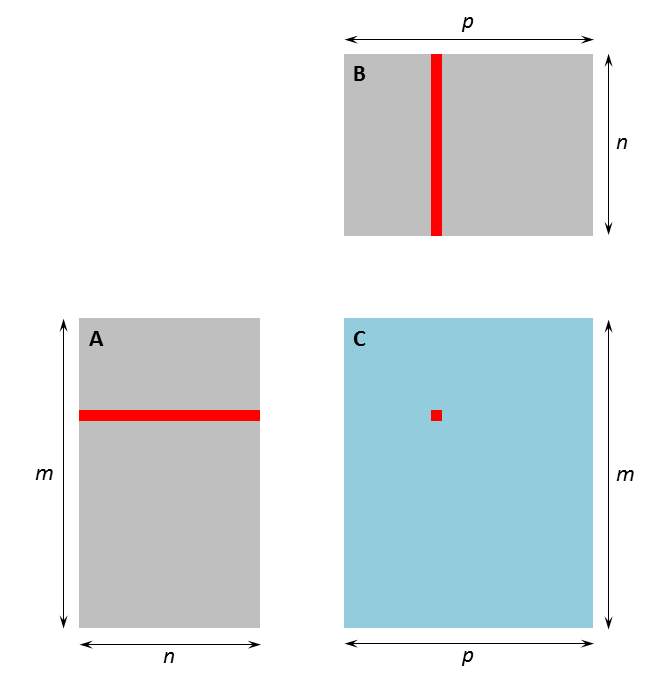 Now for the kernel function. The way we've chosen to divide this problem up amongst threads is to have each thread calculate a single element in the output vector, C. Mathematically, for an m-by-n matrix A and an n-by-p matrix B, this is:

for each of the m-by-p elements in C. This is illustrated in the figure, where the input matrices A and B are shown in grey, and the result, matrix C, in blue; a single element of C is highlighted in red, and the corresponding row and column of A and B are also highlighted.

We implement this in CUDA C as follows:

This is reasonably simple. Each thread figures out which output matrix element it is responsible for, simply by checking the thread indices. It proceeds only if the element indices are within the correct bounds of the output matrix, which may not be the case if there are more threads than elements (because we have to have a whole number of thread blocks). Where they are, it retrieves the correct row of A and column of B, and calculates the corresponding single element of C.

For completeness, here is the host code. The new things here that we didn't see in the vector multiplication example are:

The call to cudaDeviceSynchronize() ensures that all threads have finished before the host code proceeds any further.

Performance analysis of the naive implementation

Clearly, each of the \(mp\) elements of \(C\) requires a full row of \(A\) and a full column of \(B\) - both of length \(n\) - to be read from memory, and one value to be written back. Hence there are \((2n + 1)mp\) memory accesses. Re-examining the kernel, we see that there are two floating point operations per iteration of the inner loop (one multiply and one add), and \(n\) iterations of that loop, which is completed for each of the \(mp\) elements in the product matrix. Hence, there are \(2nmp\) FLOP, and the CGMA is \(2n/(2n + 1)\); which is effectively 1, except when the matrices are very small. With a memory bandwidth of 150 GB/s, the algorithm is limited to just under 150/8 = 20 GFLOP/s (assuming double precision), which is still less than 2% of the available compute of our nominal 1 TFLOP GPU.

Improving on the naive implementation

However, it turns out that we can improve on this. So far, all the data storage has been in global memory, because that's the only permissible location for CUDA memory allocations in the host code, and that's where the data stays unless we explicitly move it, once inside the kernel function (we'll see how later). It's also clear that in this algorithm data gets re-used frequently. Every row of matrix \(A\) is used \(p\) times and every column of matrix \(B\) is used \(m\) times. If we contrive an algorithm that gets the necessary data into shared memory before it is needed, and keeps it there while it is being re-used, then we can clearly reduce the global memory accesses.

However, it's not as though we can read \(A\) and \(B\) into shared memory and have them accessible to all the threads working on the computation; shared memory isn't globally accessible, despite the name, but is instead local to a single streaming multiprocessor, and only 'shared' amongst the threads in whichever thread block is currently assigned to the SM. Hence our goal is to ensure that the threads in a given thread block have the subset of input data they need available in their SM's shared memory, under the general assumption that because of the small size of the shared memory, not all of the needed data will fit in at once. 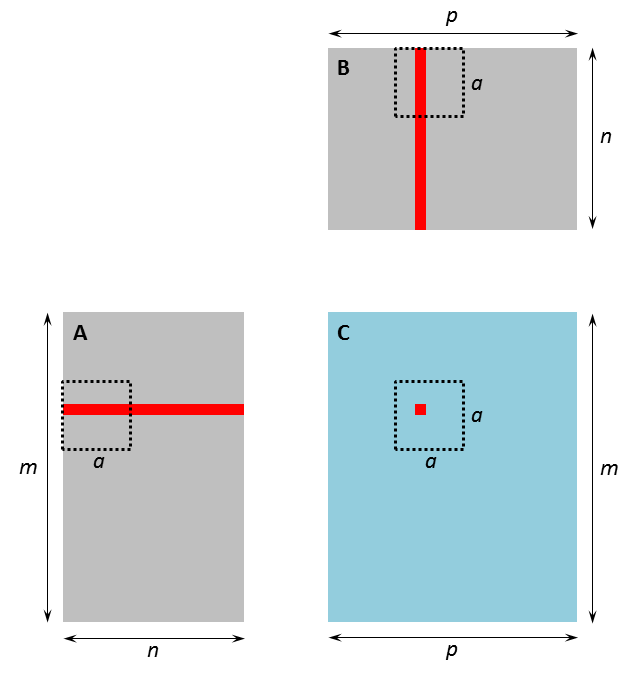 Consider a thread block covering an area of the product matrix \(C\), which is \(a\) rows high by \(a\) columns wide, with the top-left element being \(i\), \(j\) and the bottom-right therefore being \(i+a, j+a\). This is shown in the figure. To compute these values, the rows \(i, i+1, ..., i+a\) of matrix \(A\) and columns \(j, j+1, ..., j+a\) of matrix \(B\) are required, comprising horizontal and vertical strips, respectively, of dimension \(a \times n\) elements. We assume in general these strips comprise too much data to move all together to shared memory. Instead, we move a block of elements from the strip of \(A\), and a block of elements from the strip of \(B\) - i.e. two blocks of size \(a \times a\), one from each matrix; we will refer to these as tiles. Performing matrix multiplication on these two tiles creates a tile of partial sums in the \(C\) elements. When the next pair of tiles from \(A\) and \(B\) are retrieved, the partial sums are further incremented, until eventually the full strips have been processed and the final answers are available.

Here is the kernel for tiled matrix multiplication.

In each thread block, the \(a^2\) threads load two float values each and perform \(2a\) floating-point operations to compute the dot product of the row and column sub-sections (both of length \(a\)) required for the single output matrix element it holds. Hence there are \(2a\) computations for two memory loads, which gives a CGMA ratio of \(a\). For the naive implementation it was 1, so we have improved the CGMA by a factor of \(a\) by tiling the data.

There are a few other things to note in the kernel.