As we've seen in previous posts , in a parallel region, all threads execute the same code. When we parallelised the calculation of the Mandelbrot set , we had to devise manual ways of dividing the work amongst the threads ourselves.

OpenMP has extensive support for parallelising loops, since loops are the main source of parallelism in many, particularly scientific, applications.

The closing directive is optional.

The !$OMP DO directive can take:

clauses. Recall from earlier that loop counters are private by default (in Fortran).

Since the !OMP PARALLEL / $OMP DO combination is so common, there's a shorthand version:

This can take all the clauses that the PARALLEL directive can take.

Returning to our Mandelbrot set example, we can replace the logic for manually distributing threads with the !$OMP DO directive:

The speedup we see is comparable with the first example, where we divided the pixels into a set of \(N\) contiguous blocks, where \(N\) was the number of threads used.

Without any clauses, !$OMP DO or !$OMP PARALLEL DO will attempt to distribute work as evenly as possible across threads. The scheduling can also be controlled explicitly using the SCHEDULE clause:

where n is an integer chunk size to be passed to the scheduling algorithm.

If n is specified, the iterations are divided into chunks of size n, and distributed cyclically to the the threads; this is called a block cyclic schedule. If a chunk size is not specified, the one chunk per thread is created, of approximately equal size; this is a block schedule.

Looking at the run times, we can see this: 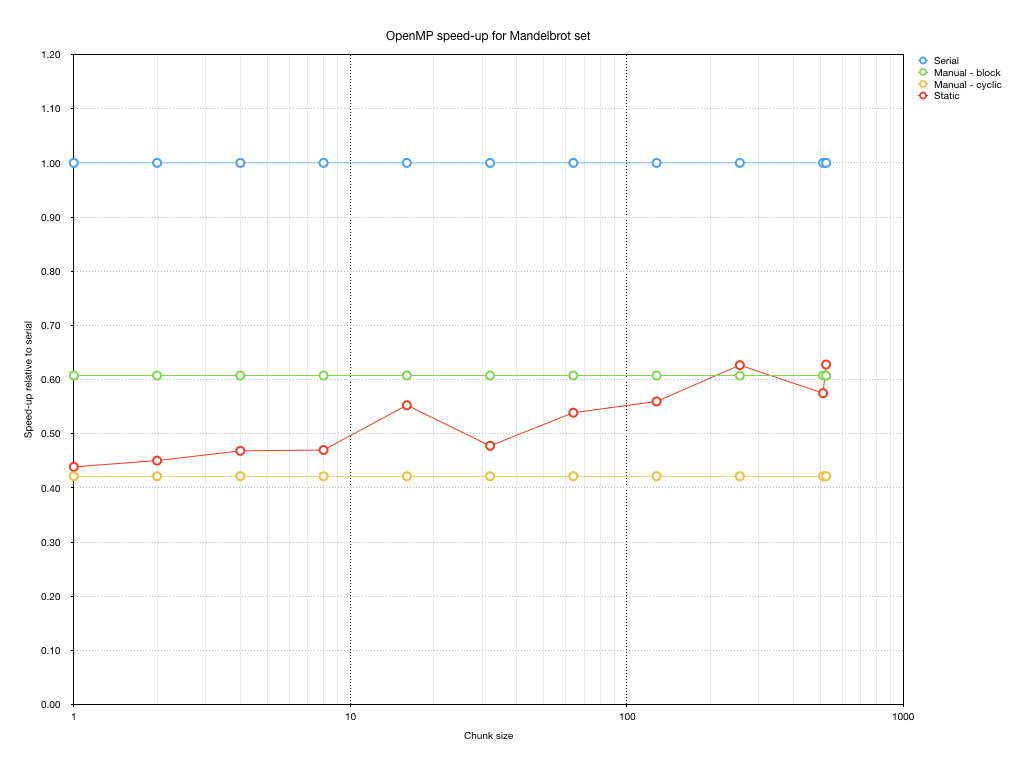 With the dynamic schedule, the problem is broken up into chunks of size \(n\) as before, but instead of being cyclically allocated to threads, the chunks are allocated dynamically; i.e. on a first-come, first-served basis. Once a thread finishes its chunk, it is assigned the next chunk in the list. If no chunk size is specified, it defaults to one.

As might be expected, this schedule improves the overall performance slightly. Not only this, but the performance is less sensitive to chunk size. 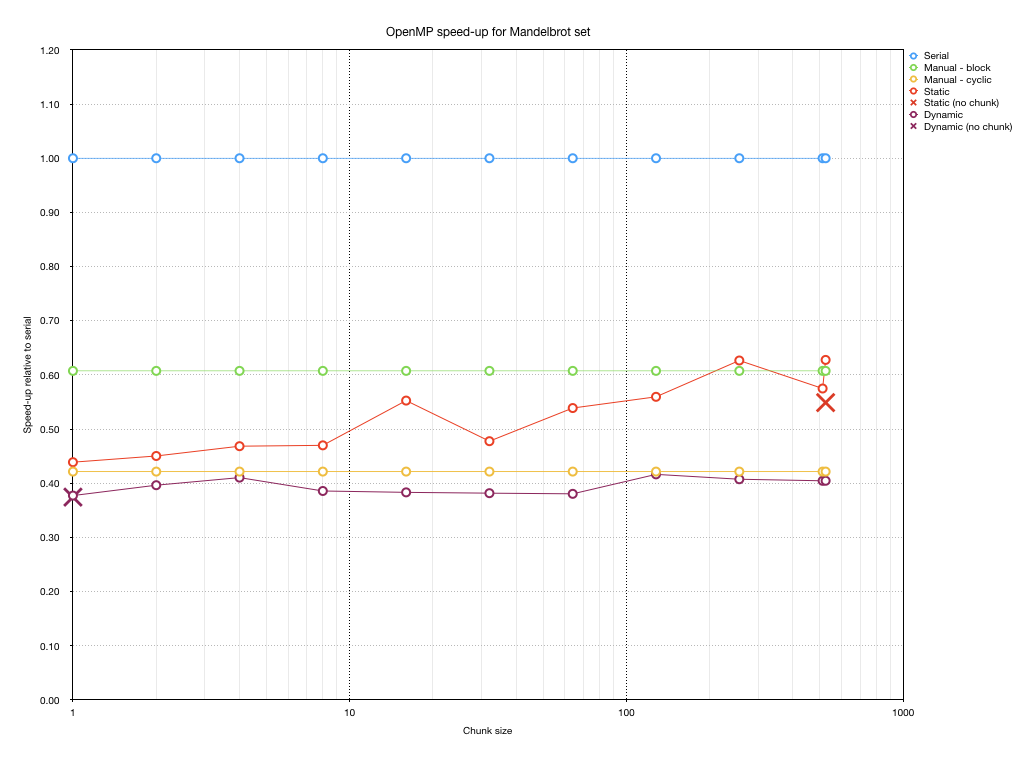 Here we've also added single points for both the static and dynamic schedules, to indicate the performance when no chunk size is specified.

This schedule is like DYNAMIC, except that the chunk size starts off large and gets exponentially smaller as it proceeds. The size of the next chunk is proportional to the number of remaining iterations divided by the number of threads. In this scheme the chunk size \(n\) defines the minimum chunk size; when this is not defined, the default is one.

The GUIDED schedule performs poorly for this problem at this scale; better than serial, but consistently worse than all the other ways of dividing the problem considered so far.

The AUTO schedule allows the run-time complete freedom to choose the assignment of loop iterations to threads. This is useful if a loop is executed many time, as then the runtime can evolve a good schedule with high performance and low overheads.

RUNTIME causes the schedule to be determined at run time, from the OMP_SCHEDULE environment variable. E.g.:

The following rules of thumb will help choosing a schedule:

These notes are built on the "Hands-on Introduction to OpenMP" tutorial given at the UK OpenMP Users' Conference.

This work is licensed under a Creative Commons Attribution-NonCommercial-ShareAlike 4.0 International License.